My research interests lie in galaxy formation and evolution, in particular the observational study of galaxies in the early universe (z > 7). A lot of my work involves designing, undertaking and analysing follow-up spectroscopic surveys of high-redshift candidate galaxies. 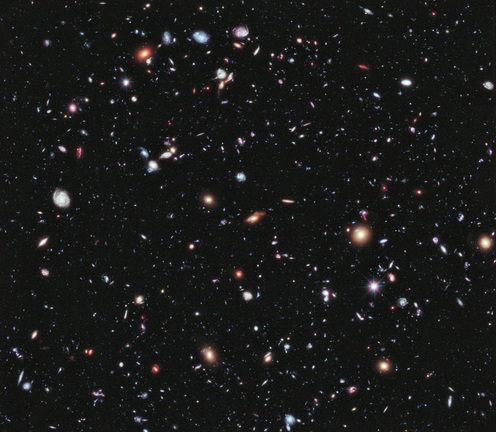 Image source: http://hubblesite.org/newscenter/archive/releases/2012/37/
At such high redshifts, a particularly useful emission line is Lyman alpha.  This emission line can be used to gain a lot of information about these objects, such as deriving their redshift.

For objects lying at such high redshifts, the Lyman-alpha line is redshifted to the infrared region of the electromagnetic spectrum. In analysing this data, where any potential signal is very faint and the infrared background sky varies a lot over short time-scales, a lot of effort goes into developing optimal reduction techniques.

The observatories I use for this work are both space-based and ground-based.  These galaxies are viewed at a time when the universe's hydrogen content was very neutral, so these galaxies are used as probes of the ionization state of the universe during its infancy. Of particular interest is the question of whether these first objects provided sufficient photons to reionize the universe.

Image Copyright: Joseph Caruana
For my follow up spectroscopic studies, I have been using various spectrographs installed on ground-based observatories to carry out long-slit, cross-dispersed and multi-object spectroscopy. These instruments include FORS2 and X-Shooter on the Very Large Telescope (VLT), MOIRCS on the Subaru telescope, and GNIRS on the Gemini South telescope.